Terungwa, his little brother cries out to him from behind. The helplessness from his younger brother’s voice pushes his face to the distant skies, as though some answers awaited him. Mocked by the vastness of the empty space above, Sesugh bows his dolorous shame to the dampness of his shirt. The shirt will soak every agony from his heart, for as long as his eyes can pour. “I’ll wipe my tears with my left hand and hold you tight with my right,” he said with a broken voice. He stammers more words, not quite clear this time, just in symphony with his brother’s wailing. “don..t wo, wo… rry”, he forces out the words but Terungwa cuts him short, “Baba yeee, Mama yeee” he wails, wagging his mouth wide to divert the cascades of tears from his cheeks, lining down his little jaw. 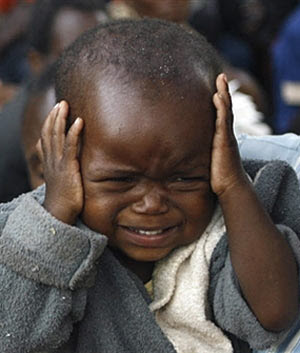 Sesugh holds his brother tight as they force their way through the mammoth of crowd that gathered round the grave. He needs to make it to the frontline, in order to identify the remains of his parents to his younger brother. He owes his little brother the allegiance of reconnecting him with their parents, though lifeless. It could be a family reunion of some sort. He cannot tell if they will hear him or not, but his sweat, mixed with tears will ascend to heaven. When it drops on the earth, a seed will surely germinate. For such are the significance of children.
The news of the attack had flared like wild fire in the village. With no such civilization as a morgue anywhere within miles from the village, the burial had to be done to rid the village of unpleasant odour and gory memories of the deceased. It is easy to observe that it isn’t just solidarity for the bereaved that has pulled out this much crowd, but everyone who is affected has at his disposal, the last pass to see their beloved. Such is the mission of little Terungwa and his elder brother, Sesugh.
He manages to jostle through the crowd but could not progress in his quest. The pile of corpses appeared too numerous for his teary eyes to seek through. The dark and thick blood clothed over each dismembered body part created more blurriness to his sight. As if to understand his predicament, little Terungwa forces out curiosity from Sesugh’s back, pushing high his neck to see which he can identify for himself. He gazes confusedly at the lifeless bodies but found no traces of his parents. They are all scrambled to be formed into any human identity; the only depiction of such reality for Terungwa and Sesugh would have been at the abattoir where animals are butchered without regards.

Tell someone about this:

4 thoughts on “DIALOGUE at the GRAVE”

What others are saying

Thank you for your time on my blog, please do visit again. With regards. Alpha E. Y.